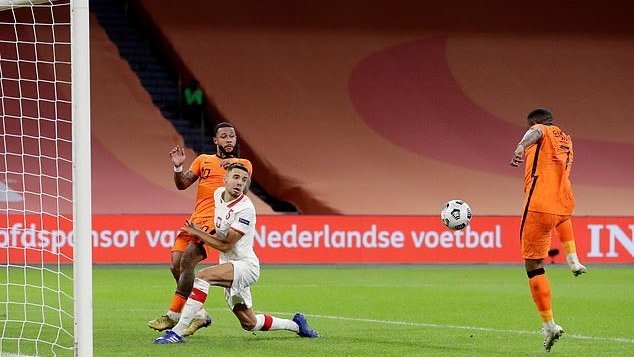 In-form Steven Bergwijn scored the second goal for the Netherlands on the way to a 2-0 win over hosts Poland as they moved a step closer to qualifying forthe final phase of the UEFA Nations League this season. Ajax Amsterdam star Bergwijn and his Dutch teammates are in Group A4 of this season’s UEFA Nations League alongside Poland, Wales and Belgium.

Bergwijn has been in sensational form since he signed for Ajax Amsterdam from Premier League team Tottenham Hotspur this summer. He has carried the form from club football international football. He doubled the lead for the Dutch team on the hour mark after PSV Eindhoven star Cody Gakpo had given the three-time World Cup finalists a slender first half lead. Gakpo had scored the first goal of the game on 13 minutes before the advantage was doubled by Ajax Amsterdam attacker Bergwijn with a third of the second half gone.

The Netherlands have kept their place at the top of Group A4 since the first set of games in the group and it looks like they would keep that top spot at the end of the last set of group games next week. They were able to maintain their three-point lead over Belgium with the away win over Poland. The Red Devils of Belgium ensured that they are still in contention for the final phase thanks to the 2-1 win at home to Wales thanks to the first half goals from Manchester City playmaker Kevin De Bruyne and Fenerbahce striker MichyBatshuayi, while the consolation goal for the away team arrived in the second half courtesy Kiefer Moore who plays his club football for Premier League side Bournemouth.